Bandicoots are small marsupials, around 40 cm long, with bristly grey-brown fur, a white underbelly and pointed ears and a long snouty nose. They use their front feet to dig for food. As they forage for underground insects and larvae, they leave behind a series of small conical holes – known as ‘snout pokes’.

Bandicoots are solitary, terrestrial (non-climbing) and nocturnal marsupials. They’re highly active and have a running style described as a ‘gallop’.

There are seven species of bandicoots surviving in Australia. The Long-nosed Bandicoot is found along the east coast of Australia. We have several sightings in our area.

Bandicoots can live in a variety of habitats, from heaths and woodlands to rainforests. They prefer habitats with dense vegetation to shelter during the day, and open areas to forage for food at night.

They forage at night using their sensitive noses to smell out food. They then use their long, curved toes to dig out the underground fare. They’re omnivores, eating both plants and animals, from insects, insect larvae, lizards, mice and snails, to fungi, grass seeds, berries and fruit. They seem to ‘grunt’ happily when they sense food, and make a shrill squeak when disturbed.

During the day, they sleep in camouflaged nests – shallow holes lined with grass, leaf litter and other debris. To waterproof their hideouts they kick a layer of soil over the top of the nest while it’s raining. They can also use abandoned burrows, tunnels and logs to hide from predators and take refuge from the elements. They mark their territory with a gland behind their ear.

Interactions between females and males are restricted to the mating season. Bandicoots breed up to four times a year and have the shortest gestation period (about 11 days) of any marsupial. They can give birth to up to five babies.

As a marsupial the female bandicoot has a pouch where her young grow, drinking milk from her teats. The pouch is ‘reversed’, opening at the back so that dirt doesn’t enter while she digs. The under-developed, furless young are only 1cm when born, and take three months to live independently.

The main threats to bandicoots are habitat loss from urbanisation and land-clearing, predation from foxes, cats and dogs, and collisions with vehicles. Native predators include snakes and owls. Intense wildfires, or too frequent burning, also has negative impacts, destroying the shelter used to hide from predators.

They play an important ecological role – turning over soil, which increases the rate of leaf litter decomposition, soil production and nutrient cycling. They’re also critical in dispersing fungi spores, so losing bandicoots from ecosystems has a cascading effect on plant diversity, species composition and structure of forests and woodlands. 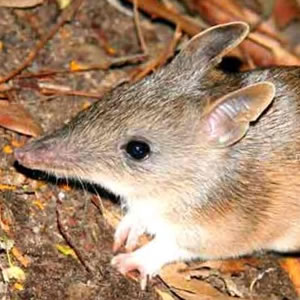