The only Funnel-web spider found near Melbourne is the Victorian Funnel-web (Hadronyche modesta), which can be found in the Dandenong Ranges. It is not aggressive or dangerous, however you may get a headache and feel sick if bitten. Although these spiders are related to the Sydney funnel-web spider, they have not been implicated in any fatalities or serious envenomations.

Female and male habits and biology are similar to the trap-door spider. Females remain in or around their silk-lined burrow. During late summer and autumn, males wander in search of females and may enter into buildings. Funnel-web spiders use what are known as “trip- wires” to catch their prey. These trip-wires are strands of silk radiating from the burrow entrance. At night, the spider sits inside the entrance with its legs touching the silken strands. When it feels the vibrations of an insect tripping the wires the spider pounces on the prey.

Funnel-web spiders live in burrows in the ground, or in stumps, tree trunks or ferns above the ground. Females are long-lived-possibly up to 20 years, and sedentary. They pass their entire lives inside the burrow, only venturing out momentarily to grab passing prey, which consists of insects and small vertebrates such as lizards and frogs. They raise their young inside the burrow. Females are rarely seen except during tree felling, excavation or landscaping work. Males mature at 2-3 years then vacate the burrow to search for mates.

If you suspect that a Victorian Funnel-Web Spider has bitten someone, apply a compression bandage to the area. Wrap the bandage over the bite and continue bandaging up the affected limb, splint the limb. Keep the victim and limb immobilised and bring transport to the victim. Transport the victim to hospital. 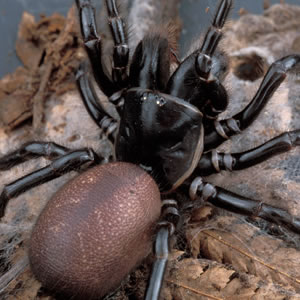