The unusual look of a Platypus caused confusion and doubt amongst European naturalists.
They thought this egg-laying, duck-billed, beaver-tailed, otter-footed mammal was fake.
The first scientists to examine a preserved platypus body (in 1799) judged it to be made of several animals sewn together.

Platypus is well adapted for semi-aquatic lifestyle. Its streamline body and a broad, flat tail are covered with dense waterproof fur, which provides excellent thermal insulation.

Platypuses are active all year round, but mostly during twilight and in the night. During day, individuals shelter in a short burrow in bank. The activity patterns of these animals are determined by a number of factors including: locality, human activity, ambient temperatures, day length and food availability.

The Platypus feeds mainly during the night on a wide variety of aquatic invertebrates. The average foraging periods last for 10-12 hours per day, and the distances the animals move during this time vary between individuals and their distribution. The animal’s primary sense organ is the bill, equipped with electro-receptors, and receptors sensitive to pressure. The precise way in which the Platypus uses the bill to detect prey is still unknown, but the bill serves to find and sift small prey from the substrate, while larger prey is taken individually.

The Platypus is mostly a solitary animal, but several individuals can share the same body of water. Platypuses become reproductive in their second year. Many females do not breed until they are at least 4 years old. Courtship includes activities such as rolling sideways together in the water, diving, touching and passing. The behaviour last from less than a minute to over half an hour and is usually repeated over several days.

After mating, a pregnant female builds a nest in a long complex burrow, possibly re-worked by several females in different seasons. The female will lay 1-3 eggs (usually 2) following a 21-days gestation period. During the egg incubation period, a female holds the eggs pressed by her tail to her belly, while curled up.

When the young hatch, the female starts secreting milk and the young Platypuses suckle from the two milk patches covered by fur on the female’s abdomen. The female spends most of this time with her young in the burrow, and as the young grow, she increasingly leaves them to forage. Towards the end of the summer the young emerge from the burrow and their fate as young independent animals is still largely unknown.

Until the early 20th century humans hunted the platypus for its fur, but it is now protected throughout its range. Captive-breeding programs have had only limited success, and the platypus is vulnerable to the effects of pollution. The Platypus is protected by legislation in all of the states that it occurs in. 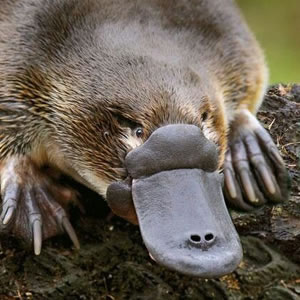