The yellow-bellied glider is an arboreal and nocturnal gliding possum that lives in native eucalypt forests in eastern Australia.

This marsupial about the size of a rabbit. It typically has grey-brown fur on its back and has an distinctive buttermilk-coloured belly, with large pointed ears and a long tail.

Yellow-bellied gliders are social and spend the day in a leaf-lined tree hole, which is usually shared with other members of the same family. It is also one of the most vocal possum gliders. It has a distinctive call consisting of loud shrieks, whirring moans, gurgles, chirps and clicks. These piercing noises, which can be heard from up to 500m away, aren’t distress calls, but simply gliders communicating with their mates. Their loud noises are also pretty good at scaring away predators like foxes, feral cats and owls.

Sexual maturity for the glider is around two years of age and they usually have monogamous relationships. The offspring are normally born between May and September. They then stay in the marsupium for about 100 days. The young are then left in the den for 2–3 months before they are weaned from the mother and go off on their own. Both parents care for the offspring while they are in the den.

Their diet consists of nectar, honeydew, insects, pollen and a wide spread of tree sap. It obtains the tree sap by biting a ‘V’ shape wedge/notch into the bark to promote the flow of gum and sap. All year round gliders use their lower teeth to extract sap from a number of particular species of eucalypt trees, leaving a distinctive V-shaped incision on the tree trunk.

Because the gliders only live and feed on specific species of gum tree, and are picky about which ones they choose for sap tapping, their habitats and food sources are under constant threat. Land clearing, changes in forest type (due to fire regimes and climate change) and logging has further isolated the areas in which the yellow-bellied glider can survive. 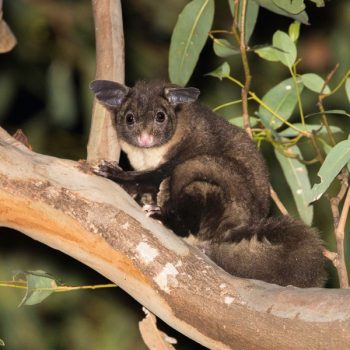 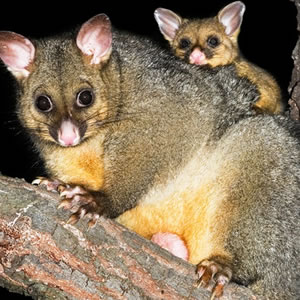