The Powerful Owl is Australia’s largest owl. It is a nocturnal bird of prey, has a large hooked bill and powerful talons. The male at 600-660mm, is larger than the female. They have huge yellow eyes, are dark grey-brown, mottled and barred whitish above, white underneath with bold grey-brown V-barring. Their legs are feathered to the ankle, their massive feet yellow, their talons brown. Juveniles are much whiter than the adults.

The call of Powerful Owl is a slow deep whoo-hoo sound and can be heard several kilometres away. The male’s voice a little deeper than the female. The male’s call is territorial but the female seems to call to keep in touch with her mate. Around the nest the owls utter a strange sheep-like bleating. This is used by the female when the male is returning with food, or may show anger or anxiety. The juveniles call with thin chirruping trills.

The Powerful Owl lives in dense mountain gullies, wet and hilly sclerophyll forests, coastal scrubs, forests and even pine plantations, providing there are large tree hollows and a plentiful supply of prey. Their territories are large, 1000 hectares or more and pairs live 3-10 kms apart.

Breeding occurs from April to September, usually August to September. They nest in a hollow limb or trunk of a large tree usually 15-40m above the ground. The floor of the hollow is never more than two metres below the entrance, and is prepared by the male. The same hollow may be used for several years. Usually two round dull white eggs are laid in May-June. Incubation takes 38 days. In this time the female only leaves the hollow to take food from the male. The male rarely visits the nest in this time. The young fledge 7-8 weeks later but often stay with the adults for weeks or even months, roosting and hunting with one of them until early Autumn.

Powerful Owls are very shy birds especially the female who will desert the nest after minimal human disturbance. The male however, may become very aggressive in the breeding season and even attack humans near the nest.

The Powerful Owl hunts from perches, mainly slow moving arboreal mammals and large birds. Typically they feed on Brushtail possums, Ringtail possums, Sugar gliders, Tuans, Antechinus, Rabbits and Mice. Birds known to be taken include Kookaburras, Sulphur Crested Cockatoos, Galahs, White-winged Chough, Magpies, Currawongs and Ravens. Birds may be roughly plucked before being eaten. Large prey is often not eaten until the night after capture. The owl roosts with one foot on the prey which is draped over the branch. The reason for this is not known. Powerful Owls require the equivalent of one possum per day, per bird to survive, the young need two possums to thrive. Their mortality rate in the first year is high. Usually only one young will survive.
Powerful Owls have been known to live and nest in Mount Evelyn since the earliest days of settlement. In 1880 this was recorded, “A pair of Eagle-owls had their home in an inaccessible part of Winters Swamp and hunted in the surrounding forest. Their eerie calls could be heard on moonlit nights and the McEwin boys made expeditions to locate their nest, but always failed to penetrate the swamp. One morning they found one of the owls marooned in a tree near the Olinda Creek (below Hendersons) – too heavy to fly home after making a meal of an unlucky flying squirrel, the remains of which was scattered beneath the tree.”

Help us to monitor and protect our Powerful Owls. Together we can ensure that the Powerful Owl doesn’t disappear from the landscape forever!  We need your continued support to safeguard the survival of Powerful Owl and their habitats along with other species across the country. If you see them, please add your SIGHTING! 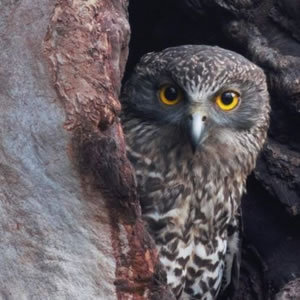