Months spent tracking the Long-Nosed Bandicoot in Mount Evelyn have finally paid off, with the most significant local sighting of the animal in over 50 years.

As part of the Bandicoot Watch Program, the traps picked up a hazy image of the bandicoot in Mount Evelyn about four weeks ago.

But it wasn’t until Mr Hennessy scrolled through footage on 10 August, that the ultimate gem was found – almost 300 videos and photos of the Long-Nosed Bandicoot.

“You would imagine my absolute surprise when I was reviewing the footage to see that there were dozens of images,“ Mr Hennessy said.

“I still can’t get over it, I’m still blown away.
“We’ve been looking for eight months for some credible evidence and now we’ve found the most intimate shots of this species I’ve seen for a long time.”

The only other confirmed sighting of the Long-Nosed Bandicoot in Mount Evelyn since 1967 was in 2018, when one of Yarra Ranges Council’s infrared cameras captured an image as part of its Fauna Monitoring program.

MEEPPA president Clare Worsnop said she believed conservation efforts for over the past decade may have helped bring the bandicoot back.

“For the last 14 years we have been working with Melbourne Water to remove all the invasive weeds and revegetate the area with grasses,” she said.

“We’ve had a huge task and because we have managed to do such a good job to regenerate the bush, we’ve created a habitat that the bandicoots can live in.
“It’s very rare to have creatures like bandicoots so close to an urban area.
“Our ongoing work over the last 14 years, in particular, is starting to pay off.”

The Long-Nosed Bandicoot is one of six surviving species of bandicoot still found on the Australian mainland.
Since European settlement, three species have succumbed to extinction and one is only now found on offshore islands.
Mr Hennessy said the sighting was a “sign of hope” for the future of the bandicoot species.

He said it could also have other implications, which would need to be researched further to confirm.
“In a broad sense it means cats and foxes have been more appropriately controlled,” he said.
“It also means the species is possibly showing signs of adapting to changing landscapes but that will have to be explored much further.”

The Bandicoot Watch Program will now look to determine the size of the Long-Nosed Bandicoot population in the region and its breeding potential – that is, whether the animals are capable of breeding in the area.

Mr Hennessy also encouraged locals to report sightings of peculiar diggings in their gardens to MEEPPA, to help the group locate possible populations. 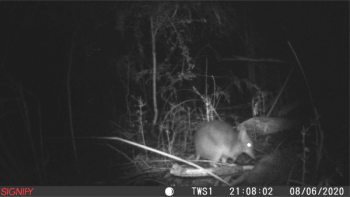 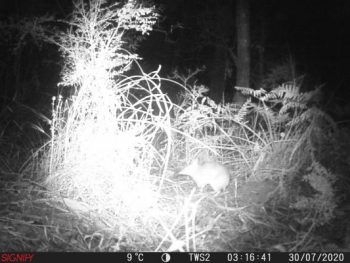